I’ve had an account on Instagram since at least March 2013 (based on my earliest upload there I can find), but been pretty hobbled with what I could do with the place since all my devices got too old to run the latest version of the app.

Not that it was much easier to get stuff up on there when they still worked, having to first transfer stuff from my camera to the PC to the device in order to get it up on Instagram.

Once the mobile devices were no longer an option, I kinda left it for a while until having a stab with Android emulator software Bluestacks. END_OF_DOCUMENT_TOKEN_TO_BE_REPLACED

The other day I finally got round to changing the wordpress theme on this blog.

I’d been meaning to for at least a year, maybe 2 years, but like many things never seemed to get round to it.

I’d already done a similar switch on some of my other blogs where I’d been using one called “Responsive” after google started getting naggy about how you make your website around 2014-2016 insisting you use “responsive web design” (shortly before they then got naggy about using AMP as well / instead of)….

As much as I like the theme when I first installed it, the creators seemed to make a bit of a hash of it through numerous theme updates.

For now I’ve gone with the “Twenty Sixteen” theme until I find something better. Still probably have a bit more fine tuning to do with it.

Recently bought this Honeywell HTF090B Turbo USB Fan to replace a cheapo USB fan I bought on Amazon back in July 2010 after the wire snapped on me.

Button on the front provides 2 settings: on or off.

When it’s switched on it feels almost as powerful as the Prem-i-Air 3 speed mini tower fan I bought at the same time as my old USB fan does on it’s lowest setting.

The USB cable is a thin 2-wire affair similar with a jackplug type thing at one end similar to a voltage adapter plug thing 1980’s/90’s kids may be familiar with from running their old Walkmans + Gameboys off the mains to save on batteries…. the other end a standard USB thing, so you can power it off a PC or I’ve also managed to plug it into the USB mains chargers than came with my old iPhone 3GS + iPad2.

The battery compartment has a plastic battery holder that pulls out via a ribbon to reveal the other 2 of the 4x AA batteries hidden inside. Item came with 4x fairly respectable “GP” branded Extra Heavy Duty AA’s ready fitted.

The fan tilts on a click-wratchet so it stays put when angled.

Only problem I’ve had with it is that it has a habit of readily falling over if you have it angled even the tiniest bit forwards.
Sends it clattering down off the top of my PC case nearly every time I turn the thing off, or when I pull myself up out of my gaming chair.
Normally it just hangs there on the cord like a stranded bungie jumper, and only twice has it fully made it onto the floor – once with the cable parting company with the fan, and just before I wrote this review it took the USB clean out of the socket.
Still working fine despite it’s lemming-like tendences to come crashing down onto my keyboard or the floor.

Honeywell logo printed on front of it barely lasted a few weeks before it’s almost faded to nothing.

It was the early hours of Saturday morning (19th June), and after several days of sweating my nuts off due to the heat/humidity of the weather, it had now gone cloudy with a hint of possibily raining.

This mean’t once again my Dad turned the gas fire on in the livingroom (even though it wasn’t cold enough to need it on), and once again he’d whacked-up the thermostat for the central heating to levels not even needed in the middle of winter unless the weather flips to the sort of thing only normally encountered by polar explorers.
END_OF_DOCUMENT_TOKEN_TO_BE_REPLACED

I started this year kind of wanting to try a bit more to push forward with the content creator thing writing my blogs here and elsewhere, as well as try and get my YouTube channels back on track.

As with a lot of content creator types who mostly rely on going outside with a camera doing things to get their content, that has pretty much gone right down the s****er.

This has also had a knock-on effect on trying to cobble together blog posts on things that don’t require me to go outside to do things to be able to put together some content.

I’m just really creating this post to try get out of the funk by writing any random s**t that comes out of my head to try get back in the habit of more frequently tinkering with my websites and social media. END_OF_DOCUMENT_TOKEN_TO_BE_REPLACED

So, my new replacement mouse mat arrived back on 28th April from Amazon UK.

I was originally aiming for an Amazon Basics gaming mouse mat, but that became unavailable a few days before I had the money available to put the order through, so i got a Kensington Memory Foam Mouse Mat instead, which at least brand matches the Kensington Keyboard wristrest I got before I later bought my leaky old Fellowes Gel Mouse Mat (thought I got it around same time, but looking back through my Amazon orders shows otherwise) END_OF_DOCUMENT_TOKEN_TO_BE_REPLACED

By the start of 2016 I figured it was probably about time to invest in a new mousemat, as my original from 1999/2000 was starting to look a bit grotty + the rubber/neoprene stuff it was made of was starting to come to bits.

After poking around on a well known popular online mail order shopping emporium, I opted for the Fellowes Crystals Gel Mouse Mat with Wrist Support thing in black, and ordered it at the end of January.

It still appears to be available for around a tenner.

Earlier on this morning I was playing CS:GO (as I often do), and discovered it had developed a slight technical problem. END_OF_DOCUMENT_TOKEN_TO_BE_REPLACED 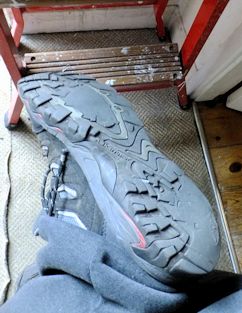 Getting back from town about half an hour ago, and as a sign of just how exciting my life is right now, I checked under my shoes on the way in, and I’m not sure how my Karrimor Walking Shoes are this clean underneath them considering the amount of mud and dog turds I had to dodge my way past to make it to town and back…..

END_OF_DOCUMENT_TOKEN_TO_BE_REPLACED

Recently, due to a lack of availability of chocolate, I decided to attempt an experiment at making my own out of what is essentially the binder mix for Chocolate Cornflake Cakes / Chocolate Rice Krispy Cakes.

I put it in a cake baking tin that’d been chilled in the freezer, and left it in the freezer for a couple of hours. END_OF_DOCUMENT_TOKEN_TO_BE_REPLACED

I made my first steps blogging here on my own wordpress powered blog a long time ago under my other john-duck.co.uk domain name, then spent some time tinkering with other website and blog projects under brand names I had a crack at creating after some troll prick decided to be a pain in the arse on my personal accounts.

I dabbled a bit with my blogspot account in that time, but as I think I blogged on here some months ago, have decided to press this one back into service and switched it to my other personal domain name.

I’ve decided to try press on with this one seeing as the Adsense ads on the blogspot thing quit displaying months ago, and I have been working on the back-end of this and my other blogs the past few months.

I’ll probably use blogspot occasionally still if I need to write down blog ideas and this one has technical gremlins at some point.

I’m trying to think of ideas for an improved site banner / logo thing than the one currently in use: